You are here: Home › Students' Final Theses › English heraldic terminology and its sources

As a former student of auxiliary historical sciences, I decided to make use of my previous knowledge from this branch of study and connect it with the study of language. Therefore, the work I created needs to be viewed not merely as a piece of writing on linguistics, but also from a historical point of view.

My Bachelor’s thesis was primarily focused on the analysis of lexical sources of English heraldic terminology. First of all, it should be noted that heraldry is an auxiliary historical science concerned with the study of coats of arms. It arose for practical purposes on the battlefield in the early twelfth century. In England, the first real evidence of this discipline comes from the middle of the twelfth century, which is a time of great change in English history as well as the English language. A few years after the Norman conquest of 1066, French became the official language of England. The significant impact of these events on English heraldry is reflected in the concision and precision of English heraldic terminology. Therefore, the formal language of English heraldry, the so-called blazon, became Norman-French, later influenced by English as there were attempts to anglicize the blazon. Nevertheless, the practical part of the thesis reveals that English as such has never asserted its control over French as far as heraldry is concerned.

By the 13th century a great number of present-day English heraldic terms were already in existence, and the language itself has been only slightly modified in the course of time. It is for this reason that English heraldic terminology can be considered rather static and largely influenced by the Middle English period.

The thesis deals with a set of 137 carefully chosen vocabulary items from the field of heraldry. As mentioned above, etymological analysis has ascertained that French is the most significant source for this restricted language, although in the great majority of cases it was a mere mediator between English and Latin. It is actually Latin from which most of the terms originate. We can observe too, however, that one more valuable and rather dominant language made its way to this distinctive lexicon, i.e. the language of the Anglo-Saxons with its Germanic origin. While words introduced to the English vocabulary in the Middle English period were brought to the language chiefly from French, the predominant source of words emerging in the Old English period was the Anglo-Saxon language.

Nevertheless, some heraldic terms originated only in the Early Modern English period. The donor language of these terms was often French but a lot of words came directly from Latin, too. The fact that just one of the terms analysed is known as an addition in the Modern English period supports the claim that heraldic language is rather static.

From the findings stated above, it can be concluded that the sources of English heraldic terminology are not very diverse. Only occasionally and in much smaller numbers was this specific language enriched by words from other miscellaneous sources, such as Celtic, Old Norse, Balto-Slavonic and Italian as well as more remote ones such as Persian.

Semantic analysis shows that English heraldic terminology is of a mixed nature. It contains numerous technical terms that must be studied to be understood. More specifically, one quarter of the terms dealt with in this work are used only in the context of heraldry. On the other hand, many of them are commonly encountered even in the language of the present day, with or without a change in their meanings, and are thus easily intelligible to the general public.

In addition to the etymological and semantic analysis, the thesis also examines the grammatical and syntactical features of the blazon, as this is a very interesting issue for the study of language. As it has specific features of grammar and syntax as well as a vocabulary set, mastering the art of blazoning can be compared to the learning of a completely new, foreign language, not least because of its unique terminology.

At least one example of the English blazon is worth mentioning at this point:

This coat of arms can be considered the origin of the English Royal Arms that later developed into a more complex heraldic achievement, and is understood as the arms of England alone.

One could hardly believe that this string of words has anything in common with the English language. Out of the eight words in the blazon above, practically only two of them can be used outside the context of heraldry with no change in their meanings.

The first item in the blazon refers to the tincture (i.e. colour, metal or fur) of the field, which means red. The second piece of information given describes the primary charges (i.e. devices placed upon a shield), that is to say three lions, and specifies their attitudes (i.e. positions). The lions are thus represented as walking (passant) and facing the viewer with their bodies sideways (guardant). In pale means that the lions are situated in a vertical row and, finally, or suggests that they are gold. The sequence in which the coat of arms is blazoned, i.e. the number first, the title of the charges and their position second and tinctures third, is in accordance with the strict rules of heraldry. 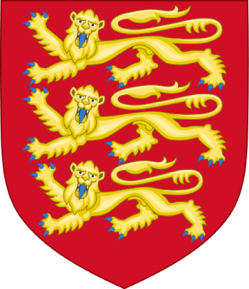 Not only does the Bachelor’s thesis analyse lexical sources of English heraldic terminology and examine them in historical context, it stresses certain features that are characteristic of the United Kingdom, such as the emphasis on tradition, which helps us to understand why English heraldry is considered very conservative.