You are here: Home › Report › Four Years as a Tarantula Keeper – Would you Like to be One Too?

It’s been a month since I’ve forgotten my fourth anniversary as that weirdo who keeps big, hairy spiders. It had all started quite innocently, as a desire to have a companion on my desk during the sleepless nights spent studying, procrastinating or simply being unable to sleep. A tarantula is an ideal desk pet. It’s relatively cheap and low-maintenance. The enclosure doesn’t cost much, the food is cheap and the feeding intervals quite long, there’s very little waste and no smell. You can leave for a week and the spider will be perfectly fine.

Being quite fond of animals, I’d done my research before acquiring one. That had the undesired effect of bringing indecisiveness into the equation. You see, before I started my research, I’d had two species in mind, with the plan to pick one of them. After I dove into the depths of the Internet and books, the pool expanded to eleven. In the end, I chose and ordered three, which spontaneously became four upon pickup at the monthly expo in Prague because I just had to get that Avicularia versicolor, which subsequently got named Taz. 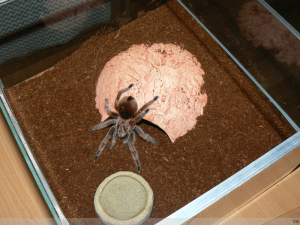 So there I was, a green tarantula keeper with a lot of theoretical knowledge. However, no amount of reading can prepare you for the reality. The first time I’d opened Taz’s jar, she bolted and ran up my arm. I naturally flinched, having experienced something like that for the first time. Even today, I cringe at the memory. The poor spiderling was launched from my arm and landed a couple dozen centimeters below on the desk. If it hadn’t been an arboreal spider, adapted by evolution to leaps amongst the leaves, I would have lost a tarantula right on day one. Years later, Taz is still alive and kicking – and I don’t flinch anymore.

If you choose to get a tarantula as your new pet, you’ll come through the same phases as I did, for you can only learn some things by doing. You will, too, worry about every little spot that could be mould growth and turns to be just feces. You will, too, think your eight-legged friend is in a death curl, only to realise it’s just cleaning and grooming itself. You will, too, anxiously watch it molt for hours.

However, as time passes, you’ll stop flinching, you’ll stop worrying, at least to an extent. You’ll get to know your tarantula’s quirks and habits, you’ll watch it grow from a tiny thing that would fit on your pinky finger’s nail to a cricket-devouring monster, should you choose to raise a spiderling instead of (or in addition to) getting an adult one.

[image: Acanthoscurria geniculata now and then]

Eventually, you’ll start craving more. Be warned: tarantulas are like crisps – you can’t have just one. There are over nine hundred species with varying colours, sizes, and behaviours. So far, I’ve stopped at eleven but there isn’t an exotic pet expo or fair which wouldn’t stir the desire to have one more. My desk is now cramped with enclosures of varying sizes, various tools and empty cricket boxes.

Still interested? Then I’ve got a couple of tips for you.

The Internet is full of various care sheets and most of them are filled with complete nonsense. Just a couple of days ago I’ve read a care sheet for the meanest species I keep – short-tempered, defensive, possessing a moderately strong venom and unbelievably fast – calling it docile and suitable for beginners.

Knowledge is power, and although, as stated above, there are many things that you need to experience, it helps. It could even help you not kill your spider. If you’re well-versed in English (and I assume you are, reading this), get a book on the subject. An excellent one is Tarantula Keeper’s Guide, Third Edition by Stanley A. Schultz and Marguerite J. Schultz (Publisher: Barron’s Educational Series, Inc., Hauppauge, NY, 2009). I do not recommend any book available in Czech, as they’re woefully outdated. If you have questions, there are several Internet forums that will help you with the issue. Be sure to double-check the information, though.

They’ll try to sell you heat lamps, heat pads, thermometers, humidity gauges and other gadgets that are, in fact, as useful as a chocolate teapot. Your tarantula will be perfectly fine at temperatures you are comfortable with. If you don’t have to put on layers of clothing to stay warm or sit there in your underwear so you don’t overheat, your new companion will be comfortable as well. As for humidity, the species you’ll most likely pick as a beginner – a nice Grammostola or Brachypelma –  come from arid climates. Simply keep a shallow dish (you can even use an upturned large bottle cap) filled with clean water. A layer of substrate and a spot to hide, and you’re set. 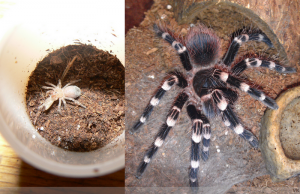 In fact, I would go as far as to say that it’s better not to buy a pet store tarantula. They’re often poorly cared for by employees who usually don’t know much about them and the price is often too high. Visit a local exotic pet expo or fair, such as the monthly ones in Prague and other major cities. You’ll be able find a much greater variety of species, talk directly to the breeders, and easily obtain feeder insects suitable for spiders of all sizes.

Grammostola pulchripes is a great beginner species – fairly docile, eats well, amazing black-and-gold colouration. It is sold in Czech Republic mostly under the junior synonym (a name mistakenly given to an already discovered and described species) Grammostola aureostriata.

Grammostola rosea and G.porteri are amongst the most common species available. Originally considered colour morphs of the same species, they possess a variety of temperaments and have a tendency for prolonged fasting. Nevertheless, I still recommend them as they’re virtually beginner-proof and nigh-indestructible. Sometimes, people sell those two species under junior synonyms such as G.spatulata in order to inflate the price tag.

If you have a bit more money to spare, look for Grammostola pulchra. This docile, stunningly jet-black tarantula ranks amongst the slowest growing species and due to its rarity, adult specimen are quite expensive.

Brachypelma albopilosum is something of an oddball within the genus. The combination of a dark body and long, dense gold-white hairs covering it is quite unique. The species eats vigorously, grows significantly faster than its more popular cousins and doesn’t have their tendency to flick urticating hairs, which makes it an ideal beginner species.

Brachypelma smithi, emilia, auratum and boehmei have similar traits – slower growth, tendencies for fasting, temperament on the skittish side, eagerness to flick urticating hairs when disturbed. They all sport patterns of black, orange and red. The members of the Brachypelma genus count amongst the most abundant species in the hobby, and thus are easy to get for a relatively low price.

That’s all from me for now. Let’s meet again in the next issue, where you’ll hopefully find another article about the eight-legged life.